Overview – A tale in four acts

Act 1 – January and February saw equities rising to all-time highs because of the late 2019 détente in U.S./China trade relations, with markets pinning their hopes on the success of the Phase One trade deal. Accompanying the enthusiasm were signs that global corporations looked poised to exit their multi-quarter earnings slump.

Act 2 – Those February highs brought stretched equity valuations, ultimately proving to be a high precipice from which to fall as the global economy abruptly tumbled into a deep recession amid the world economy shutting down due to the COVID-19 pandemic. With businesses forced to shut down and citizens placed under lockdown to contain the spread of the virus, global equity markets posted their worst three-month decline since the Great Financial Crisis. Previous narratives that dominated headlines were swiftly thrown out the window in favour of news surrounding coronavirus case counts and new outbreaks. All eyes turned toward the shape of the COVID-19 infection growth curve. The COVID-19 news cycle singularly drove global equities to their March 23 bottom.

Act 3 – Exiting the March 23 bottom, equity markets bounced back sharply, posting one of the strongest and quickest recoveries in history. Why? How? As inconceivably bad as economic data was in April, the unprecedentedly large monetary and fiscal response from world governments was even more overwhelming. The combined strength of a united fiscal and monetary response from governments globally – flooding financial markets with abundant liquidity – backstopped risk assets and stabilized capital markets. Stocks, bonds, currencies and commodities (with the notable exception of oil) were arrested from their freefall: the S&P 500 and the S&P/TSX rebounded over 30% from their March 23 bottoms to the end of April.

Act 4 – May and June delivered economic data that began to surprise to the upside. Some companies began to show they were indeed benefitting and/or adapting quickly to the lockdown environment. [These enterprises, mostly within Information Technology, e-commerce but other surprising sectors too, are endearingly referred to as COVID-plays. See our GLC Insights: Crises are Trend Accelerators for more.] The infection curve began to flatten while reopening efforts in the earliest hit parts of the globe started to take shape. We were left with global equity markets once again closing in on their previous all-time highs after a mere three months.

Equity markets appear priced for a V-shaped recovery on hopes of a vaccine coming sooner rather than later, continued support from world governments and central banks, and the global economy thawing quicker than expected from its frozen state. However, a plethora of major headwinds are still present: deglobalization (highlighted by U.S./China trade tensions); disrupted supply chains (both within countries and globally, as evidenced by slumping global trade); post-World War II record-high unemployment rates; skyrocketing corporate and national debt; global civil unrest; and, a U.S. election right around the corner. Meanwhile, evidence of a second wave may have already arrived, just as lockdowns are lifted across the world. While hope for a therapeutic solution or vaccine is high, it remains just that – hope.

For our views on where markets go from here, read GLC’s 2020 Mid-Year Capital Market Outlook. 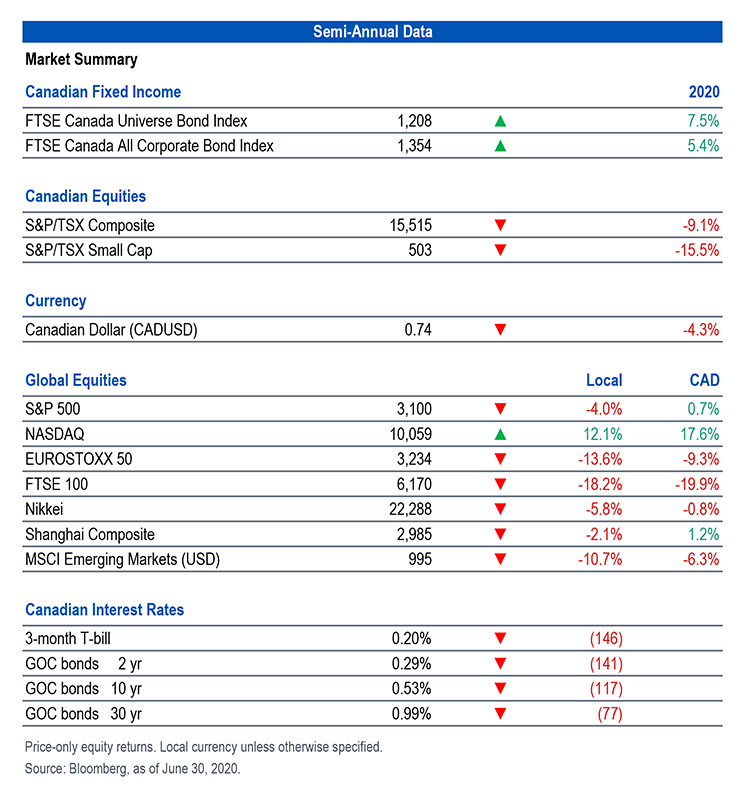 Let’s dig deeper into our recap of what affected capital markets for the first half of 2020, including world government and central bank actions, commodities, equities and fixed income.

Fiscal and monetary stimulus to the rescue

A key reason why equity markets have rebounded so sharply is due to the massive, coordinated response by world governments and central banks:

Similarly, central banks around the world are vying for the title of “biggest spender”. At the end of June the U.S. Federal Reserve was the current titleholder in nominal dollars with a balance sheet north of USD $7 trillion, leapfrogging Japan at USD $6 trillion. If we add in the remaining G4 (i.e., adding efforts from the European Central Bank and the Bank of England to those of the U.S. Federal Reserve and the Bank of Japan), the combined G4 central bank balance sheets sit at USD $21 trillion, up from ~USD $15 trillion (or 37%) in six months. If you look at the size of central bank balance sheets on a percentage of GDP basis, Japan is way out in front at 118%, followed by the European Central Bank at 53%, then the U.S. at 33% and, finally, the U.K. at 31%.

What happened with commodities?

Post March 23, commodities responded positively to the rescue packages from global governments and central banks with one noted exception…oil.

The first half of 2020 saw substantial swings in oil prices. A price war erupted between Saudi Arabia and Russia on March 5; just as global oil demand was about to crater. This culminated on April 20 when the price of West Texas Intermediate (WTI) oil fell $50 in just two hours, dipping negative! The front-month contract (which at the time was the May 2020 contract) hit USD -$40/bbl – the lowest level in 150 years of recorded data.

The negative-pricing phenomenon was due to:

Each challenge collided and compounded with the effect of the others (see our April podcast: What's going on with oil prices?).

Oil prices have since rebounded to USD $39/bbl driven by signs of global demand starting to recover; along with OPEC and Russia (OPEC+) ending their price war by agreeing to continue their record production cuts for the time-being. However, WTI oil prices are still down over 35% from the beginning of the year when prices were around USD $60/bbl. The International Energy Agency (IEA) estimates global oil consumption in 2020 will contract by a record 8.1 million barrels per day (mbpd). While they see it climbing by 5.7 mbpd in 2021 (to an average of 97.4 mbpd), that would still be 2.4 mbpd below 2019 levels. The IEA suggests demand may not return to 100 mbpd until 2023.

What happened in equities markets?

First-half 2020 performance for global equity indices depended largely on their varying sector compositions. In short, those indices having a sizeable weight in the Information Technology (IT) sector benefitted, while indices more exposed to the Energy and Financials sectors suffered. Therefore, it’s no surprise to see that U.S. equities outperformed their peers. The tech-heavy NASDAQ Composite Index (nearly 50% weight in IT) produced a positive double-digit return, while the S&P 500 Index was able to mitigate its loss to low-single digits, given its 27% IT weight. Conversely, the laggards are the S&P/TSX Composite and MSCI EAFE Index, which ended with a high single-digit loss for Canadian equities and a double-digit loss for EAFE equities given their less than 11% IT weights. Canadian equities were also hurt by their heavyweight Financials and Energy sector exposure (combining for over 40% of the index). Plummeting oil prices and a production shut-in response weighed on the Energy sector. The deteriorating macro backdrop brought massive provisioning for loans losses at banks, with the lower interest-rate environment also weighing on performance – although the yield curve has steepened slightly bringing a modicum of relief.

Emerging market equities produced a double-digit loss in the first half of the year. Financials, which make up almost 20% of the index, dropped 26% and was the key factor in their underperformance. In addition, emerging market equities are vulnerable to the progression and outcome of U.S./China trade negotiations. In the last three months, China has struggled to meet the lofty quotas set in Phase One of the deal, blaming the shortfall on disruptions brought by pandemic-induced lockdowns. Investors and U.S. policymakers have voiced their concerns and doubts linger on whether China will be able to honour their end of the deal. The narrative on U.S./China relations in general is a moving target between secret meetings in Hawaii and mixed messaging from the White House. Case in point, Peter Navarro, Director of Trade and Manufacturing Policy at the White House, sent shockwaves through the investing community when he was quoted on June 22 saying “it’s over” in reference to the trade deal. The statement was promptly rescinded after U.S. stock market futures bucked at the comments after hours. Beyond trade itself are the ongoing security concerns that western nations have with China’s technology companies. Even the mighty and giant technology stocks in the U.S. take serious note whenever talk of actions against China’s Huawei take centre stage. 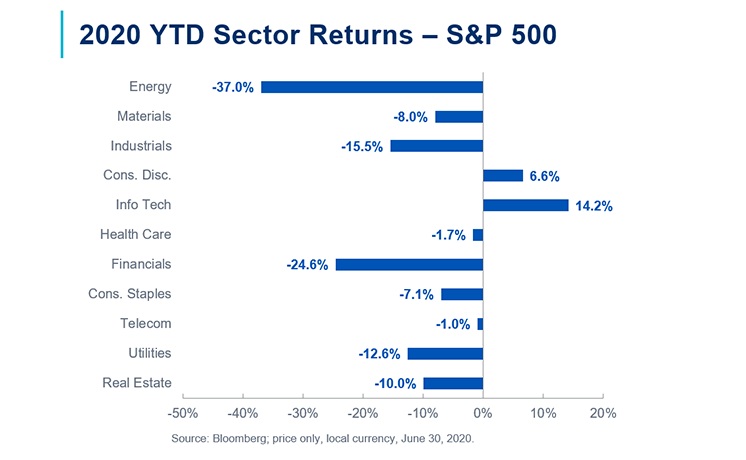 What happened in fixed income markets?

The FTSE Canada Universe Bond Index had a strong first half of 2020, producing a 7.5% total return, reminding investors of the importance of high-quality fixed income within balanced portfolios. With the exception of one scary ‘mad dash for cash’ episode*, global bond yields plummeted to historic lows, as central banks cut interest rates to near 0% and investors flocked into safe-haven assets. As a result, longer-duration bonds outperformed relative to their shorter-term counterparts. On a sector level, Canadian corporates underperformed relative to government bonds, hurt by widening credit spreads due to the coronavirus outbreak. Within the government sector, the provincial bond index, with its longer duration profile, saw the strongest performance. Meanwhile, high-yield bonds underperformed investment-grade bonds, delivering a negative absolute return.

*The 2020 ‘Mad Dash for Cash’: In the 13 trading days between March 9 and 26, the yield on the 10-year Government of Canada bond nearly doubled from 0.54% to 1.04% as the FTSE Canada Universe Bond Index fell -6.5%. Gold, another safe-haven asset, suffered a similar fate as gold prices fell $200 (-12.5%) in eight trading days. What happened? During the middle of March, at the height of the risk-off environment, both credit and equity markets became dysfunctional. The dysfunction in fixed income materialized with sovereign bond yields spiking and prices falling. For those few weeks in March, a ‘sell what you can’ mentality took root, resulting in a ‘mad dash for cash’. While cash was likely the world’s most unloved asset for much of the past decade, momentarily at least, the mantra ‘cash is king’ was reclaimed! This felt very reminiscent of the chaotic period following the Lehman Brothers collapse in September 2008. Many of us here at GLC lived and worked through that 2008 experience. It’s during times of widespread market panic that we can lean on that experience and expertise of our seasoned portfolio managers to not play into the panic and to stay above the fray.

The events of the first half of 2020, and the aftermath of the pandemic, cast a thick shroud of uncertainty over the future of the economy and – more importantly – how everyday life will be altered. However, we’re moving forward. Society and the economy are encouragingly adapting to COVID-19. But is it enough to justify the extent of the April-to-June equity market rebound? We don’t think so.

The economy has begun to heal – economic indicators show early positive signs toward a new, different normal – and we are celebrating. BUT, it’s still early days and knowing exactly what the ‘new normal’ will look like is nearly impossible (see our GLC Insights: Crises are Trend Accelerators for more). Even putting aside the unfortunate potential for a second-wave setback, we think the sharp recovery for equity markets is too far, too fast.

Our 2020 Mid-Year Capital Market Outlook calls for a difficult path through year-end for equites and low single-digit gains for fixed income. We hail safe reopening efforts and are encouraged by the better-than-feared early progress. But we must separate hope from strategy, and fundamentals from emotions. While the economic fundamentals are better than expected and we’re optimistic about achieving some of the better-case scenarios, stock markets appear to be getting ahead of themselves, declaring victory when it’s barely at half time in what will surely be a long game.

We anticipate a return of volatility. As such, in our asset allocations, we currently stand defensively positioned, poised to seize on shifts in sentiment and the expectation of assets repricing from frothy levels.